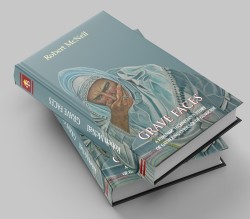 As a forensic technician working for the United Nations, Robert McNeil did the most vital of the world’s dirty jobs. He cleaned up after war and brought war criminals to justice for genocide and crimes against humanity, using dead bodies as evidence.

From 1996 to 2009 Robert combined his day job in NHS mortuaries in Glasgow with an extraordinary hidden life – he travelled the world exhuming bodies and helping to solve crimes. He worked in the concentration camps of Bosnia and Kosovo, most notably after the Srebrenica massacre, the first genocide in Europe since the Holocaust.

Now he has written a book, ‘Grave Faces’.

He has written 105,000 words, focusing on Bosnia and Kosovo, asking universal questions of humanity trying to understand the level of cruelty and barbarity perpetrated against so many innocent civilian men, women and children – “in what was not a civil war but simply a war of aggression”.

He tells the incredible stories of ordinary people whose lives were shattered forever, mothers seeking the bodies of their sons, the Srebrenica survivor who escaped after being tortured, shot and thrown into a mass grave. His book also describes the teamwork and humour necessary to do such demanding work. It begins and ends in a particularly harrowing deployment to Kosovo in 1999.

Robert will donate the proceeds from the book to the Association of Women Victims of War (Sarajevo).

The book is available for order from Behar Publishing, here.

“In this intimate and beautifully written book, Robert McNeil takes the reader with him as he journeys into the dark heart of the Balkan genocide. As each chapter unfolds the story of the most recent genocide to occur on European soil becomes clearer. It is a story of heartbreak, horror and heroism. The book captures the stories of the forensic scientists who worked tirelessly to re-unite families with the shattered remains of their loved ones and to bring the perpetrators and genocide deniers to justice. It is a book that must be read by all those who wish to understand what humans are capable of when hatred and prejudice go unchallenged.”